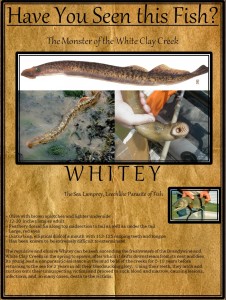 Did you hear about the weird fish some fishermen caught in the White Clay? They say it looks like an eel with a mouth full of teeth that could rival a science fiction movie. They’re calling him Whitey. Yes, it’s a monster fish and no, he is not science fiction. Whitey is actually a sea lamprey! Sea lampreys frequent the freshwaters of the Brandywine and White Clay Creeks every year searching for mates. The young remain in fresh water for 5-10 years after which they head back out to sea to become one of nature’s most notorious vampires. Though they are fearsome to behold and have wreaked havoc in the Great Lakes, sea lampreys are actually not invasive to this area and are a part of our local ecosystem and are not a threat to humans. Try to catch a glimpse of Whitey the next time you go canoeing, tubing, or fishing!