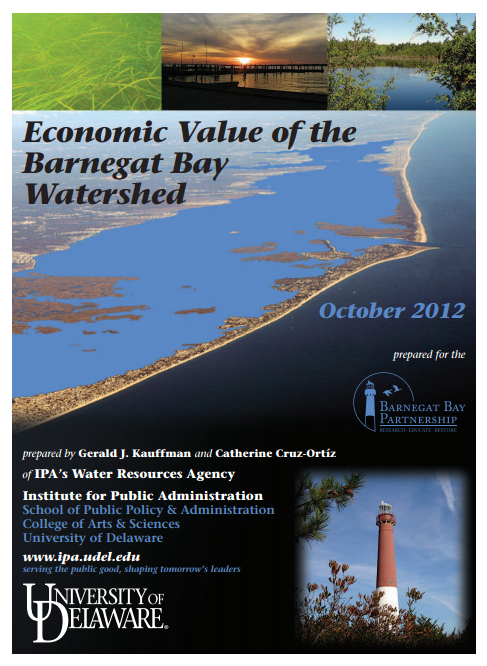 The water, natural resources, and ecosystems in the Barnegat Bay watershed contribute an economic value of $2 to $4 billion annually to the New Jersey economy. This report examines that economic value in three ways:

Values are converted to 2010 dollars based on the change in the Northeast Region Consumer Price Index, except where noted. Note that the values in the three categories are not summed because there is some overlap between certain values within each category that could result in double counting. For example, the jobs of fishermen that contribute to employment and wages are also a factor in the economic activity generated from fishing, and the ecosystem values of forests for water-quality benefits may be at least partially captured in the economic value of water supply. Accurately determining (and eliminating) this overlap is difficult within the scope of this analysis. The estimates presented in this report are as inclusive as possible, given a lack of data for some economic sectors, yet are not meant to be used to compare and contrast uses of Barnegat Bay’s water resources for their value. Some values were not included in these estimates because the data to assess them either are not readily available or do not exist. For example, the full amount of economic activity and jobs associated with the industries that rely on the Barnegat Bay watershed for their processes is not included here, because identifying those companies and gathering information on their economic activity is beyond the scope of this analysis.