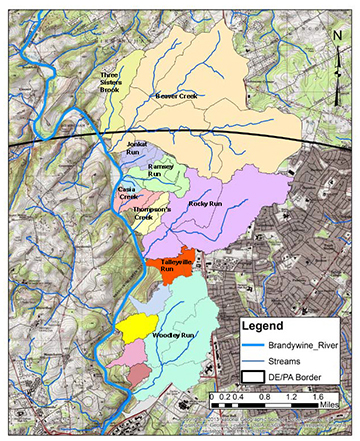 The Brandywine Piedmont Watershed Plan (BPWP) is designed to protect and restore the scenic watersheds that flow through the newly designated First State National Historical Park at the Woodlawn Tract operated by the National Park Service and adjacent Brandywine Creek State Park owned by the Delaware Division of Parks and Recreation. During the summers of 2013 and 2014 University of Delaware and The Nature Conservancy student research and field crews characterized these watersheds by land use, impervious cover, slope, soils, geology and monitored stream habitat, geomorphology, and water quality along the following tributaries that flow west toward the Brandywine Creek near the Delaware/Pennsylvania line.