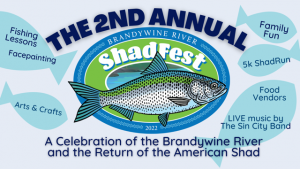 Registration is required so that we have adequate food and drink, staffing, supplies etc.

Restoring the Phenomenon of Migratory Shad to the Brandywine River

Formed in 2017, Brandywine Shad 2020 is a cross-section of educational organizations, non-profits, governmental agencies, and private citizens whose shared goal is to restore the region’s most historic fish, the American Shad, to the Brandywine River by the year 2020 by returning the river to its free-flowing, pre-colonial state.

The future of the once-abundant shad – often described as “the fish that fed the nation’s founders” – is in peril along the Brandywine primarily due to 11 old, industrial dams along the river’s 12-mile course in Delaware, but also due to lack of habitat, increasing water temperatures, and over-fishing of the remaining members of the species by commercial operations in the Atlantic Ocean.

A1) Properly called an American Shad, a shad is a member of the herring family, like striped bass, salmon and alewives. They are “anadromous” fish, which describes their practice of migrating from salty ocean waters when they live from three to five years, and then return to the fresh river waters where they spawned, to create a new generation of shad.

A2) Shad are quite striking in appearance. Generally, they are 16 to 20 inches long, and weigh from 3 to 8 pounds. While their sides and bellies are silverish and white, their backs are a shiny greenish-blue. They also have distinctive, little black spots that run from behind their eyes to their dorsal (upper back) fin. It was said that there were once so many millions of them in their annual spring migrations that they seemed to turn the rivers silver. The rivers were said to “boil” with their frenetic activity.

Q3) What is their range?

A3) Shad’s most southerly range is in northern Florida. Shad are also found along the entire Atlantic Coast, as far north as the Gulf of Saint Lawrence in Canada.

Q4) Why did the shad disappear in Delaware?

A4) From time immemorial, millions and millions of shad left salty ocean waters each spring to return to the fresh water rivers where they spawned, in order to create a new generation. The mature shad came northward up the Delaware River, and then upstream into one of its many tributaries, the Christina River, and then into two tributaries of the Christina – the Brandywine, in Wilmington, and the White Clay Creek, near Newark. Early European settlers who first came in 1638 to what is now Delaware needed to survive by milling locally-grown barley, wheat, corn, and other grains, turning them into life-sustaining bread. To power the mill wheels and turn the great mill stones, colonists built dams across the Brandywine River and the White Clay Creek. Along the Brandywine, the earliest dam – erected by Samuel Kirk around 1720 – was built to serve his barley mill. But Kirk’s dam, stretching from one side of the river to the other (called “run of the river” dams), halted the upstream passage of the shad at a site near today’s Adams Street in the City of Wilmington. Shad cannot leap great heights like salmon, so they repeatedly banged their snouts in an effort to jump over the dam. Most could not clear the dam. Over time, the great, historic shad runs ended, both in the Brandywine River and the White Clay Creek.

Q5) Why was shad called the “founders’ fish”?

A5) The shad run was so bountiful that the early European settlers – the “founders” of the American colonies – were sustained in this new land by this abundance year after year. They valued shad not only for those they would eat as soon as they were caught, but also because shad could be dried and prepared to prevent starvation over the harsh winters. Besides its flavorful flesh, the shad’s delicious eggs, or roe, are highly nutritious, and much valued by the founders.

A6) Considering how large they grow – up to 8 pounds and 16 to 20 inches in length – they eat very small things as food: primarily plankton (microscopic organisms that float in the ocean or fresh water), small shrimp, and fish eggs.

A7) Generally, shad live six to eight years. Some male shad live on, after returning to their home rivers to spawn, but most do not.

Q8) What was the effect of the dams on the Native peoples in the region, the Lenape?

A8) There was a profound cultural repercussion on the Lenape. Samuel Kirk’s 1720 dam set off a decades-long dispute between the European settlers and this area’s Native people, the Lenape. The shad were the very food that the Lenape depended upon: fresh shad, salmon and striped bass. Kirk’s dam stopped the fish’s annual run at today’s Adams Street, thus depriving the Lenape of their historic food source. For these Native people, this was not only a question of catching the fish and preparing them while fresh; but the drying of the fish for the Lenapes’ survival over the winter was an ancient, cultural tradition among them. The Lenape appealed to the Colonial legislature several times, asking that the increasing number of dams be removed. But the millers’ industry won out over the Lenape’s need for food. The dams remained. It was a crushing blow to the Lenape, who felt deceived by what they believed to be an unbreakable treaty they had forged with William Penn in the 1680s. Even though the colonists had enjoyed an unusually warm relationship with the Lenape since the Swedes’ 1638 arrival, most of the tribe felt it imperative to leave Delaware by the 1750s – just 30 years after Kirk’s first dam. They moved westward, seeking unencumbered rivers. This grim history of the disregard for Native people’s rights – admittedly, viewed through a 21st Century prism – is an unexpected part of the Brandywine millers’ legacy.

Media Coverage of the Brandywine Shad 2020 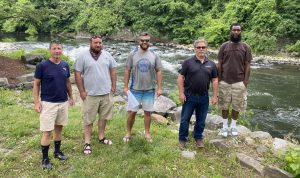 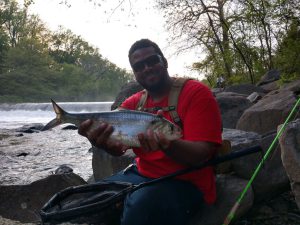 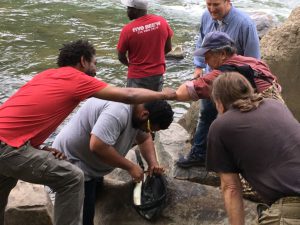 TKO and Musky Mike and Jim catching shad at Brandywine Dam No. 2